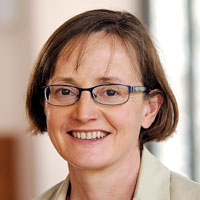 If you are a professional computer architect and have not heard of Dr. Margaret Martonosi, then you may have been living under a rock.  I’ve been fortunate to know Margaret for nearly 20 years, and when I first floated the idea of doing this profile feature for WICARCH, I had her in mind as the first profilee – and this was *before* MICRO-50, when she cemented her status as one of the elder stateswomen for diversity and representation in our field.

I first met Dr. Martonosi as a freshman at Princeton – she was my advisor and signed my course cards.  I also took her class a few years later.  I recall her being quiet, contemplative, and capable, but to see her grow into the fire that she is now – it’s been nothing short of marvelous to watch.

On the surface, Dr. Martonosi is the classically successful professor – she is the Hugh Trumbull Adams ’35 Professor of Computer Science at Princeton University, where she has been a member of the faculty since 1994.  Her CV is probably longer than she is high.  She is at a top university with some top students and some top papers.  But more importantly, she is the picture of what I would guess many of us aspire to be in life – she is not only successful in career, but also well-regarded by her peers, fit and healthy in lifestyle and outlook, and has a rich tapestry of friends and hobbies that enrich her life.

Her technical work spans fields.  She’s obviously well known in computer architecture, but she’s also published in top conferences in mobile systems and sensor networks.  In some ways, she says, there are downsides to being this broad – 15 years ago she was regularly asked if she was so-and-so’s grad student when publishing in non-architecture conferences, and when you’re not well-known you have to battle for clout.  At the same time, many in the architecture fields don’t know much about her significant work in those other areas.  But, she laughs, “it’s been fun.”  Even within computer architecture, she’s not afraid of spanning subfields, where she has worked in power-aware architecture, verification of memory consistency models, and quantum computing.  She even did a stint with the U.S. State Department on sabbatical.  In her mind, it’s fun to ramp up and learn new things, and she likes the operating point where you know enough to be useful, but can also absorb some really exciting new things.

One of her early and proudest technical accomplishments was in the field of power-aware architecture, and really pushing through the idea that power-aware architectural design had value.  At the time, circuits and devices fields had a firm hold on power in processors and the prevailing wisdom was that architects didn’t need to worry about it.  Clearly, that has proven false, and architects have been thinking about power for a long time now, in part because of the evangelizing efforts of Dr. Martonosi and her students at the time.  The proving grounds for some of this power-aware design came in her ZebraNet work, which involved building very low-power mobile sensor networks in the form of solar-powered, GPS-based, tracking collars to be put on zebras in Kenya for biologists to better study their movement patterns and social structures.  As she describes it, it was a top-to-bottom, middleware, architecture, circuits, and physical design project, and it was as real as it gets because you can’t go reboot it if something goes wrong.  She’s my hero because not only did she get to go on safari for computer science, but this project was actually deployed in the field and had to really, really work.  It’s just….cool.  No other way to say it.  I mean, I’m in *industry* and I can’t say I’ve ever had anything deployed.

But don’t let this string of accomplishments fool you.  Dr. Martonosi says, “grad school was hard for me.”  Like for many of us, college was a more natural fit, where things were concrete, answers were clear, and you could study and learn pretty objectively.  Grad school, which was “not just about knowing the answer but being able to defend the answer verbally in lively discussions,” was more of a challenge.  But she went into academia just to try it first (she notes that at the time, it was much easier to just try academia than it is now), and a switch flipped.  She emphatically loves being a professor, and the rest is history.

It’s important to note, however, that Dr. Martonosi maintains an active life outside of work.  She says that during her first year at Princeton, she worked 90 hour weeks and had a lot to prove to herself and to others.  But then, she realized that it was not sustainable to work like that, and that if she could not get tenure working more manageable hours, then so be it.  So she began hiking on the weekends, which led to being healthier, having a lot more fun at work, AND meeting her husband, so all in all it was a very good call.  This hiking branched into swimming, biking, running, and even triathlons. I must admit that we once did the same triathlon, and despite our age difference, she completely smoked my sorry butt.  So now I have yet another reason to be completely inspired by her.

Obviously, I would have been remiss if I did not ask her how she does it all. Her response was that she and a friend had decided that “Low expectations are the secret to happiness.”  She laughingly clarifies that there is a lot of happiness and sanity to be gained from knowing the priorities of which things matter a lot to you personally, versus WHEN which are the things to let things go. For example, she tells me unabashedly, “I have an ugly house.” She said when she first moved into her house 20-ish years ago, there was a bathroom she was sure would be gone in a year because it was olive green and ugly. Many years later, a kitchen renovation is just now underway, but that olive green bathroom is still untouched and still ugly — it has never bubbled up to the top of any to-do lists because she does not enjoy renovation. Everyone has different priorities, so the ranking on personal to-do lists will always vary. Everyone has their own ugly bathroom equivalent, and may we all be so wise as to know when to not sweat the things that don’t really matter to us personally (e.g., for Margaret, bathroom home renovations), and how to prioritize the things that do matter to us.