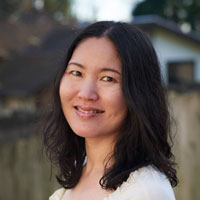 The more I do these profiles, the more in awe I become of the forces of nature that make up our community.  The thing that is important to emphasize, I think, is that not a single one of the women I’ve profiled so far has had it easy.  So if you’re a young woman out there wondering if computer architecture is for you, I hope you keep reading these origin stories, because they are awe-inspiring.

I’ve known Dr. Yasuko Eckert since she came to AMD Research as a bright-eyed and bushy-tailed intern, and I was relatively early in my career.  We bonded immediately, complimented each others’ pointy heels, and became fast friends.  I was delighted when she joined us full-time when she graduated with her PhD from the University of Wisconsin – Madison.

Despite how long we go back, I’ve realized that even for friends we’ve known a long time, you can learn a lot from interviewing them.  Yasuko’s origin story as a computer architect is one of the most delightful and amazing stories I’ve come across.

Yasuko grew up in Japan, and came to the United States to go to college.  However, she was still working on her English skills and so decided to go to community college first before transferring to a 4-year university.  Since she got her AA in Texas, she decided to apply for 4-year schools in Texas to ensure seamless transfer of credits.  At the time, Yasuko wanted to be a business major, and applied as such to the University of Texas, Austin.  When she got her acceptance letter, it said she had been admitted as a Computer Science major, which caused her great confusion.  When she contacted the admissions office for clarification, they told her that Business was a very popular major and was full, and that the best route to getting into the major was matriculating as a different major and applying for transfer once in school.  So, even though she didn’t know anything about computers, she figured she could handle computer science for one semester before putting in her transfer application.

This was how she found herself in CS 101.  She struggled at first – a lot.  When she told the admissions office she didn’t know anything about computers, she meant it.  She didn’t know where the output of “Hello, world” was supposed to show up.  She didn’t know that saving her program files to the hard disk of the lab computers meant they would not be there when she changed computers.  When this happened and she grew agitated in the lab, a group of students laughed at her, and someone said, “You know *nothing* about computers, do you?”

Fortunately, she made it through the early stages with the kindness of some friends, and very rapidly actually fell in love with programming.  She had always loved science and math, but some aspects of math felt too deterministic.  There was one right answer, and one right way to get it.  Programming felt more like a puzzle – there was a multitude of ways to get the right answer, allowing a degree of freedom to be creative.  By the end of the semester, she was so hooked that she never even bothered to apply for transfer to the business school.  The rest, as they say, is history.

If Yasuko’s life were a movie, this would be the end – the shining heroine has found her calling and it’s all smooth sailing from there.  But that is not how life works.  She continued her undergrad doing CS, and at one point decided she was going to get an undergraduate research position.  These were notoriously hard to get, and so she decided she was going to be someone who got one.  She asked every professor if they would take her on, and eventually, she ended up doing a project under the supervision of Doug Burger after very much enjoying an architecture class he taught.  At the end of the semester, she presented her work on distributed load-store queues to Doug and a cohort of his graduate students.  At this point, she had never considered going to graduate school herself, presuming it was far out of her reach.  But by the end of the presentation, everyone was impressed enough with her moxie of diving into a simulator, hacking it up, and getting results, that they all encouraged her to go to graduate school.  In particular, Karu Sankaralingam and Simha Sethumadhavan encouraged her to go for it, for which she is grateful.  By this point, however, it was late in the 2nd semester of her senior year, and it was too late to go to grad school the following academic term.  Undeterred, Yasuko decided to apply the following year instead, and at that point, she went to the University of Wisconsin to study under David Wood.

Graduate school was yet another struggle.  Coming from a culture where education was very unidirectional (teachers teach, students absorb), the open-ended nature of grad school was initially very disorienting.  It took lots of effort and energy for her to learn to formulate opinions and defend them because it came so unnaturally – she was raised to take on the opinions of teachers, not make her own.  But over time, and under David Wood’s tutelage, she learned to become a good researcher: ask the right questions, get the right data, be creative in problem solving, and present a solution that she could stand behind.  She is also extremely grateful to John Davis for taking interest in her work and taking her under his wing through her grad school years.

One unifying thing about Yasuko’s story is that despite generally having to swim upstream, it took the kindness and generosity of just a few people at key points to help her get through it all and emerge as the butterfly that she is on the other side.  Dr. Yasuko Eckert is now a valued member of the AMD Research team, where she has worked for 7 years and is a Senior Member of Technical Staff – and what a loss it would have been to have her deterred at any step along the way.  My hope is that after reading this, we all recognize that sometimes, it might be up to us to just pull someone over the hump and allow them to become a butterfly.

Disclaimer:  Yasuko is a Researcher at AMD.  This profile reflects her own opinions and may not represent AMD’s positions, strategies, or opinions.