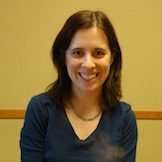 When I first met Dr. Suzanne (Suzy) Rivoire at an ISCA many years ago, we were both grad students. I remember thinking, “oh, I LIKE her.”  I was once told (by a fellow female college student) that I looked like an economics major — whatever that means.  At my core though, I knew what she meant – I did NOT look like a computer scientist.  But Suzy seemed like she could pass for an economics major too.  And that was reassuring – here we were, two grad students who could BE computer scientists without having all the external markers.

As it turns out, Dr. Rivoire is one of the most awesome computer scientists that I know.  She got her start when deciding what to major in at the University of Texas at Austin.  As she tells it, she was not “a math person” when entering college.  But the fact that electrical engineering majors seemed to be at the top of the income spectrum upon graduation did not escape her, so she chose electrical engineering as her major.  It turned out that she quite liked the architecture and digital logic side of things, and thus she continued along this path and received her bachelor’s in electrical engineering in 2001.

At this point, she considered both law school and pursuing a PhD.  In the end, as a woman and as someone who did not have the best undergraduate experience, she felt compelled to become and educator and try to do better for those behind her. It had been somewhat shocking to her, a chess champion, to go through college being occasionally treated as stupid, both by peers and (some) educators alike.  Even very powerful DNNs takes time to train, so Dr. Rivoire felt perplexed that the conclusion of her stupidity seemed drawn so early and with so little data.  She was able to examine her experience dispassionately, and decided instead to persist and acquire more data instead.  Meanwhile, she voraciously read literature about the experience of women and minorities in the sciences to try and understand what was happening to her.  All this went into her decision to become an educator.

Upon graduation, she got her Master’s and PhD in electrical engineering from Stanford (something *definitely* accessible to stupid people, right?), completing them in 2008 before taking a job at Sonoma State University in California as a professor.  The California university system has 3 explicit tiers – the UC system, which we are most familiar with and of which schools like Berkeley, UCLA, and UCSD are a part.  This is the research tier and grants bachelor’s, master’s, and doctoral degrees.  Then there is the Cal State University system, which grants bachelor’s and master’s degrees.  Finally, there is the junior college system, which very frequently transfers students into the UC or CSU systems because the mechanism for doing so is very well-codified and clear.  This enables middle-class parents to send their kids to community college for up to two years before transferring and receiving a degree from a 4-year college, saving up to two years of expensive tuition.  On the whole, the system is intended to provide accessible means to education and social mobility.  Dr. Rivoire was moved to teach in the CSU system specifically to uplift students for whom access to a quality college education would make a big difference in their ability to move up the economic ladder – students who might be written off as non-computer scientists without enough data to support such a conclusion.  Additionally, she felt a nagging worry that she would ruin some poor grad student’s life if she were to go to a research university instead of a teaching one, which in my book, is a worry both noble and misplaced.

Fast forward 10 years, and Dr. Rivoire has done amazing work at Sonoma State.  She is currently the chair of the computer science department, and has done multiple collaborations with leading industrial and government labs primarily on topics like energy-efficient large-scale computing.  She has sent undergraduates to work alongside PhD students at Oak Ridge national labs, where they have done extremely well.  Her experience with undergrads runs counter to the conventional wisdom given at education conferences like SIGCSE, where she has heard over and over to never let an undergrad ship a line of code without it being reviewed first.  In contrast, she says, she’s shipped code to the DoD written by undergrads because they work so hard and do such good work.  Many of her students, she says, do not come from privileged backgrounds where research opportunities or internships of some sort are a given.  They know a rare opportunity when they see one and work hard when given a chance.  One of her favorite stories, which she says is not the most dramatic rags-to-riches but is emblematic of her efforts, is a former student who is currently a software engineer in the Bay and running her 1992 Toyota into the ground….because she is waiting for her Tesla 3. \

My conversation with Dr. Rivoire has truly inspired me to think about what more I, or indeed all of us, could be doing to really change the game and the culture of our community.  While her career has taken a turn toward HPC and she is more likely to be found at SC than ISCA these days, she is still a person to know and be inspired by for computer architects.  Perhaps one of these days she will be inspired to go back to her roots and attend ISCA, in which case everyone should get in line to talk with her.