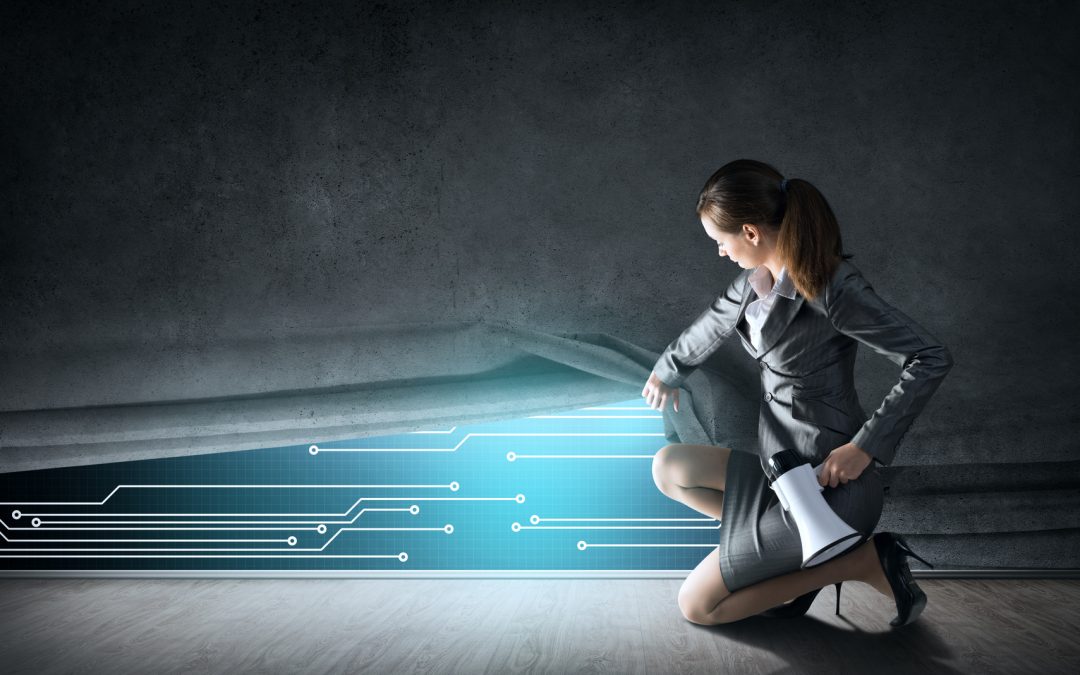 Part One: We’re Just Going to Leave This Here

TL;DR – In part one of our series on gender diversity within the subdiscipline of computer architecture, we present some data that provides signal on where our community stands today with respect to gender diversity.

There was a general air of optimism at the annual Women in Computer Architecture (WICArch) breakfast at ISCA 2017 in Toronto, where the photo below was taken. It was the morning of Day One of ISCA and the WICArch crowd was the largest group in recent history. 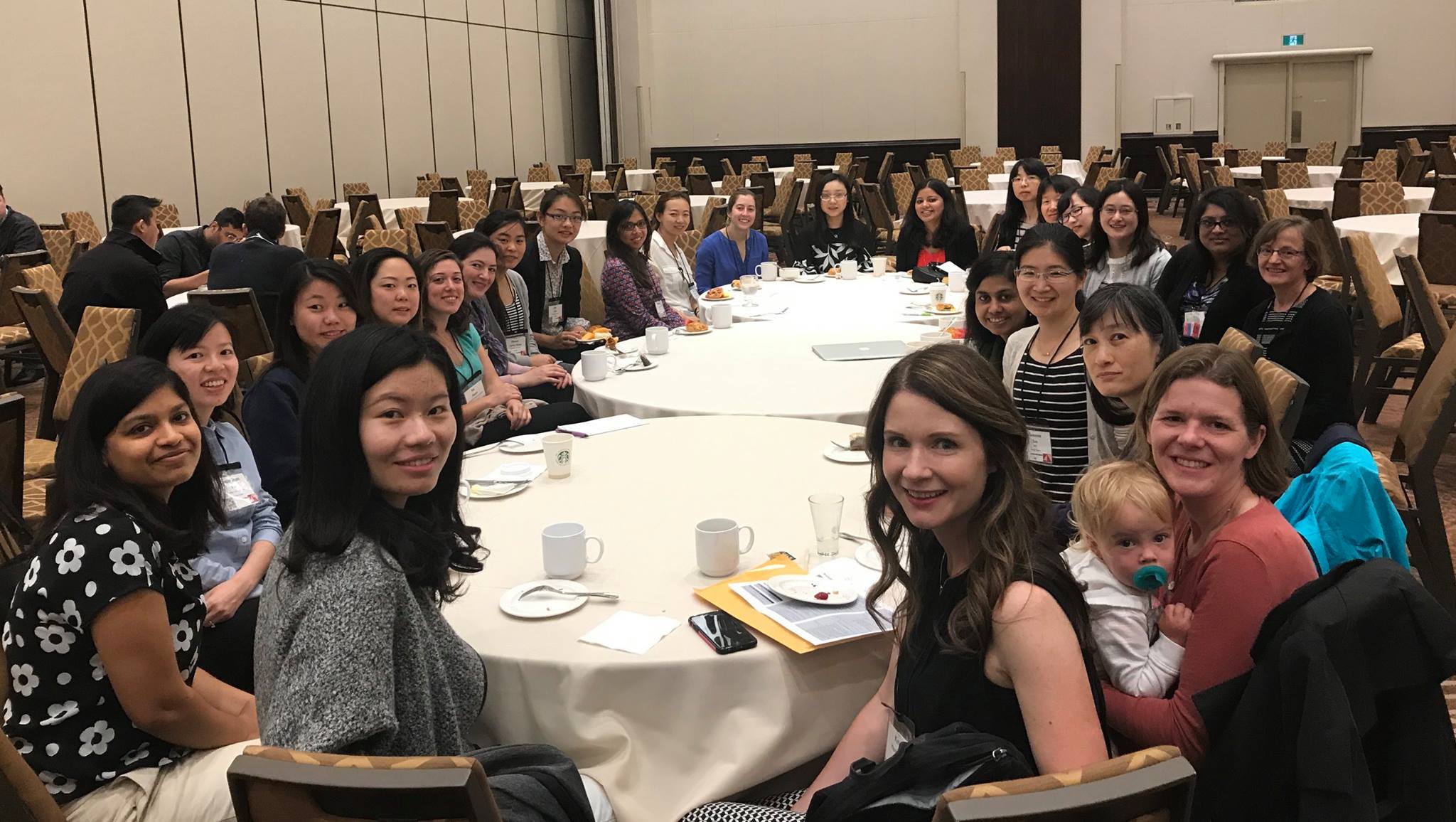 Figure 1: The WICArch Breakfast at ISCA 2017. (Nota Bene: WICArch is relaunching itself with several exciting new initiatives. To subscribe to our mailing list, join SIGARCH or SIGMICRO and specify your gender in your ACM account profile.)

That optimism began to fade moments later, however, when we arrived at the Lightning Talks, which are a preview of many of the 50 presentations that would follow over the course of the next three days.

Margaret Martonosi was perhaps the first to point it out. “Two.” She said, and we all knew what she was referring to – the number of female speakers out of the 50+ presentations that would make up the ISCA program.

We know what you’re thinking. Is that correct? Is that typical? What happened? These are excellent questions with, in some cases, measurable answers. So let’s not bother speculating, and instead, dig a little deeper and see what we can find.

And that’s how this all started. We decided to take a look at the numbers to see just how “typical” this low representation of women speakers was across four major computer architecture conferences: ISCA, Micro, HPCA, ASPLOS over the last two years. We also committed then and there to publish our findings as well as various recommendations in a series of blog posts to raise awareness.

Knowing exactly how many women comprise any dynamic community is a challenge. The community expands and contracts, and the boundaries of the community are ambiguous. These are healthy traits, yet they make the task of quantifying metrics particularly challenging. Gathering metrics such as “percentage of female speakers” is particularly challenging, as this is not documented in any consistent manner. At best, female speakers can only be estimated using other signals, such as first author designations. We did our best to gather various signals that can be used as a proxy to estimate traits about the computer architecture community.

First, we try to gather signal about the community as a whole. This is challenging. The ACM Special Interest Groups provide some signal on the overall computer architecture community, though admittedly, our community spans multiple SIGs, and many members of our community do not belong to any SIG. Nevertheless, the following graph shows the membership breakdown by gender across some of the relevant SIGs that are associated with most of the top computer architecture conferences: SIGARCH, SIGMICRO, SIGPLAN, and SIGOPS. (SIGPLAN and SIGOPS both contribute to ASPLOS.) Overall, we see that 7% (79 members) of SIGARCH identify as female, along with 6% (15 members) of SIGMICRO, 5% (80 members) of SIGPLAN, and 4% (20 members) of SIGOPS. If those numbers seem unsurprising, we’ll point out that between 17-24% of CS undergraduates at R1 institutions identify as female, 13% of CE undergraduates, as well as 17% of those holding technical roles at the large tech companies that release annual diversity reports (We’d love to know more specifically about PhDs working in computer architecture related industrial research labs.  If data is available and can be shared publicly, please pass it along to the authors.). So there is either a gap between the general pool and the computer architecture community, or at the very least, a gap in the community and the membership in the various SIGs. 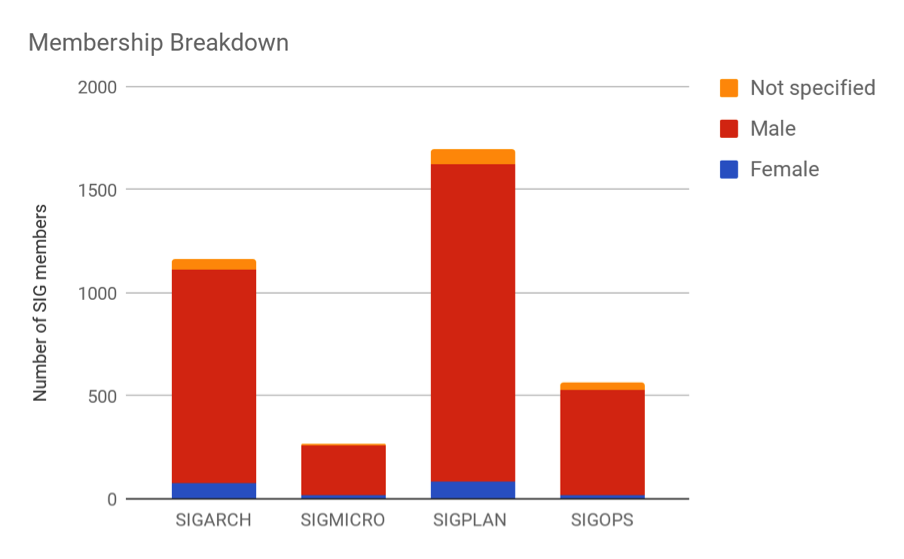 Next, we look at active conference participation in Figure 3. This is an interesting metric both in itself, as well as when broken down by service versus leadership roles. Are women in the community less likely to attend conferences? Are they less likely to serve an active role at those conferences, like speaking, and instead participate only in a service capacity, like program or session chair? Again, a full data set did not exist, so we had to undertake the tedious and manual task of scraping this data using Google searches and emails. The following figures show conference participation in various roles including across the four architecture conferences in the last two years: Program Committee, Session Chair, Author, and Speaker. (Note: Speaker data is estimated based on gender of first author.  This may be particularly inaccurate for conferences that require visas for travel, e.g., ISCA in Toronto as many advisors spoke on behalf of their students who were unable to attend.)  We followed up with the 4 female first authors for ISCA 2017.  Only 2 out of 4 of them presented at ISCA; 2 were unable to travel due to visa issues making the percentage of female speakers at ISCA 2017 less than 4%.  A breakdown of conference attendance by gender is difficult to come by; for ISCA 2017, 11% (63 out of 560) early registrants identified as female.  For ISCA 2016, 9% (74 out for 789 registrants) identified as female. 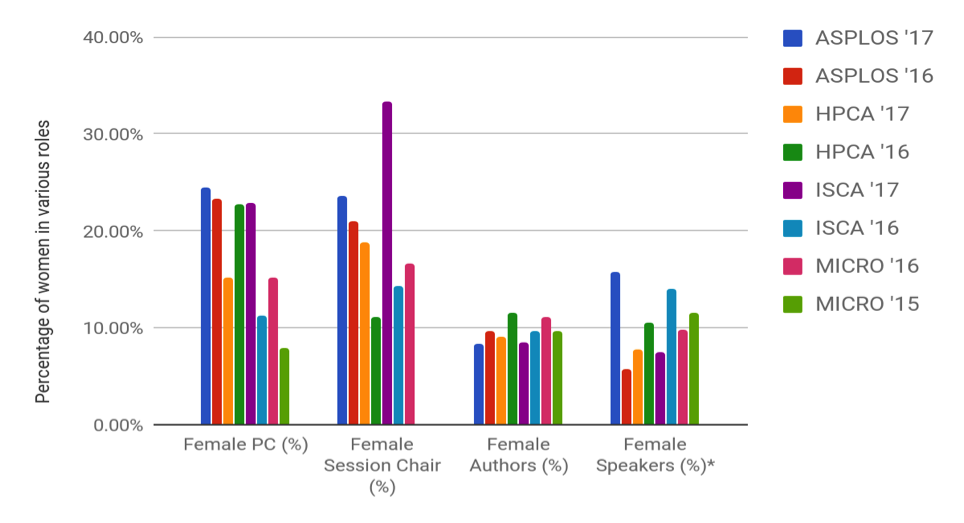 One interesting insight that seems consistent across all conferences is that women are much more likely to participate in technical service roles (program committee and session chair) versus traditional technical roles (author and speaker). Furthermore, women are more likely to be provide higher rates of program committee service than men.  Diversity is desired on PCs but with a small pool of women to choose from, many women serve on a high number of PCs. This is a common and well-known problem for academic committees.  Across the last 8 program committee for ISCA, Micro, HPCA and ASPLOS, there was a total of 420 program committee members of which 346 were male and 74 were female. However, there were fewer unique females in the aggregate list (53% vs 60%) as shown in Figure 4. The maximum service by a member of the community was 5 program committees out of 8.

While women generally comprise 20% of program committee members, these numbers do not translate to women serving as program chairs for these conferences, as shown in Figure 5.  ASPLOS stands out in this regard with 32% of past program chairs being female.  This may be due to the interdisciplinary nature of ASPLOS; however 5 out of the 7 female ASPLOS PC chairs come primarily from the architecture community. 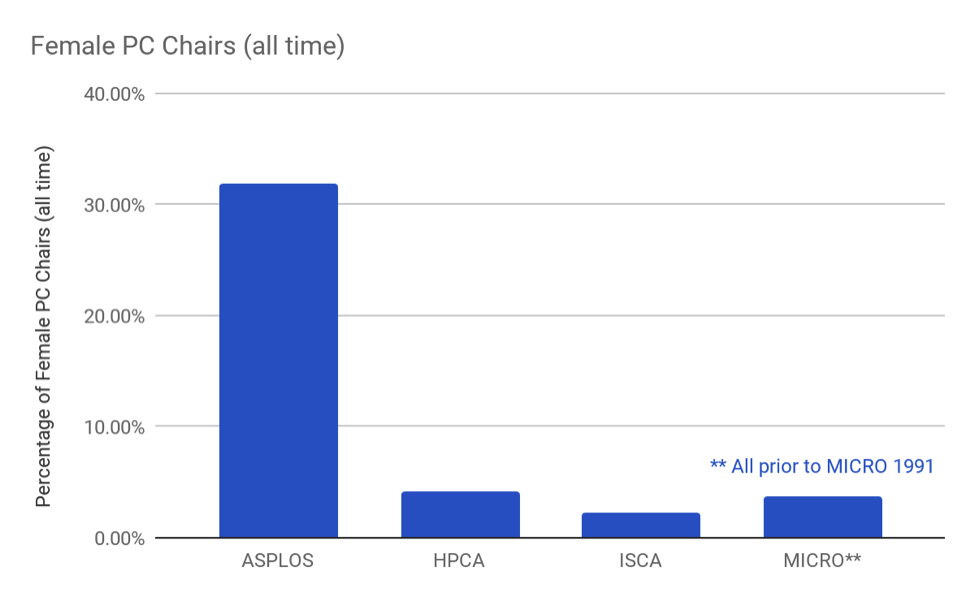 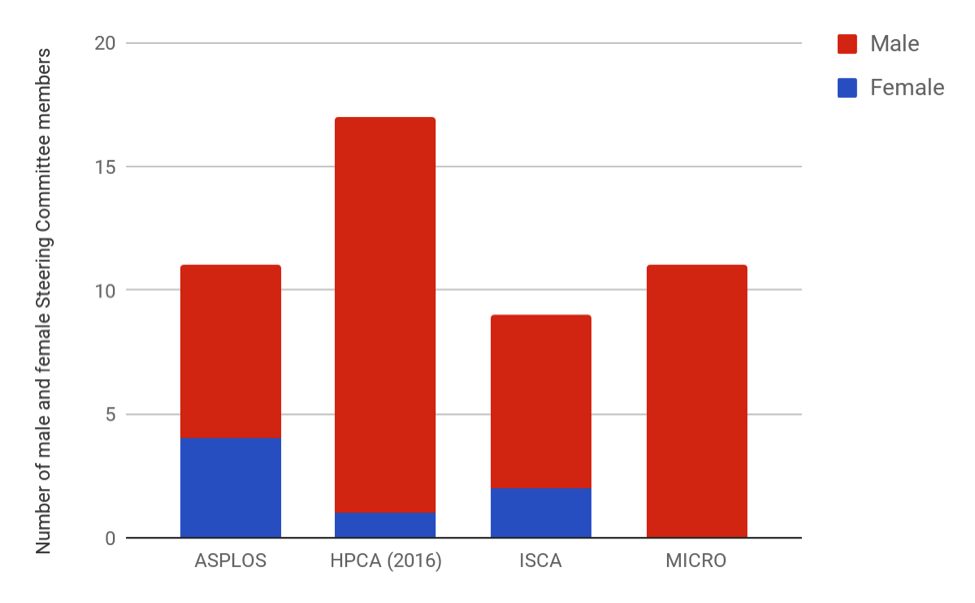 Figure 6 – Gender breakdown of conference steering committees as of September 2017.

Finally, we look at ways in which women in the community are recognized for their outstanding technical contributions. Recognition is key to retention and advancement (the subject of an upcoming blog post). In our community, recognition primarily comes in the form of keynotes, panels, and awards.  Figure 7 shows the percentage of female keynote speakers over the last 5 years.  Across 20 conferences, each featuring 2-3 keynote speakers, women have given just 4 keynotes (out of 45 total keynote addresses). 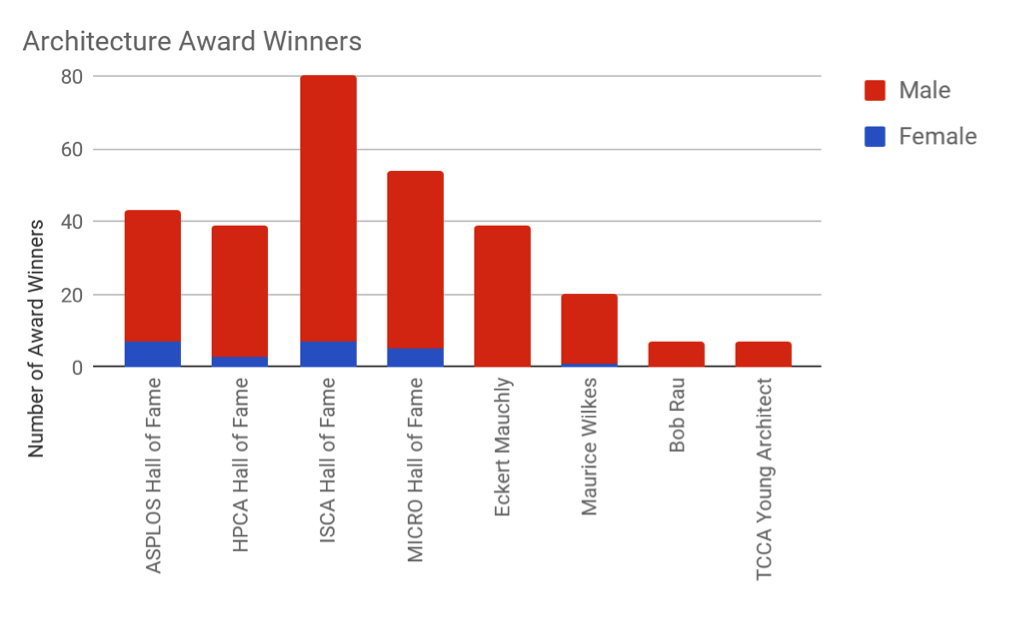 We’ve presented a great deal of data that illustrates a multi-dimensional problem in the computer architecture community, as well as providing some first order approximations on potential causes of the lack of diversity, including low diversity at the leadership level as well as low recognition for excellence.

We hope this data will serve to open the dialogue and get the community talking about ways to ensure we have the most welcoming community possible, and that we all take an active role in eliminating the unconscious biases that may exist.

To facilitate further discussion, we have planned a series of follow-up blog posts with concrete recommendations as well as additional data. Already on our agenda are follow-up posts on the following topics:

We hope you’ll join us on this journey. Even better, please join us an active contributor. We encourage general chairs and program chairs to collect conference participation data so we can perform longitudinal studies.  This data collection could capture additional aspects of diversity including under-represented minorities and LGBTQ members of the computer architecture community. Active involvement from SIGARCH and SIGMICRO in automating or funding these studies would be a great step; we hope other SIGs will be inspired by this analysis and perform their own similar studies. Further ideas on how to automate and centralize data collection, or any suggestions for future content will be greatly appreciated!

About the authors: Natalie Enright Jerger is the Percy Edward Hart Professor of Electrical and Computer Engineering at the University of Toronto; she is currently leading the WICArch revamping effort. Kim Hazelwood is a Senior Engineering Manager in Facebook’s Infrastructure division. Her team focuses on datacenter server and storage architectures, performance analysis, and characterization of AI/ML workloads.