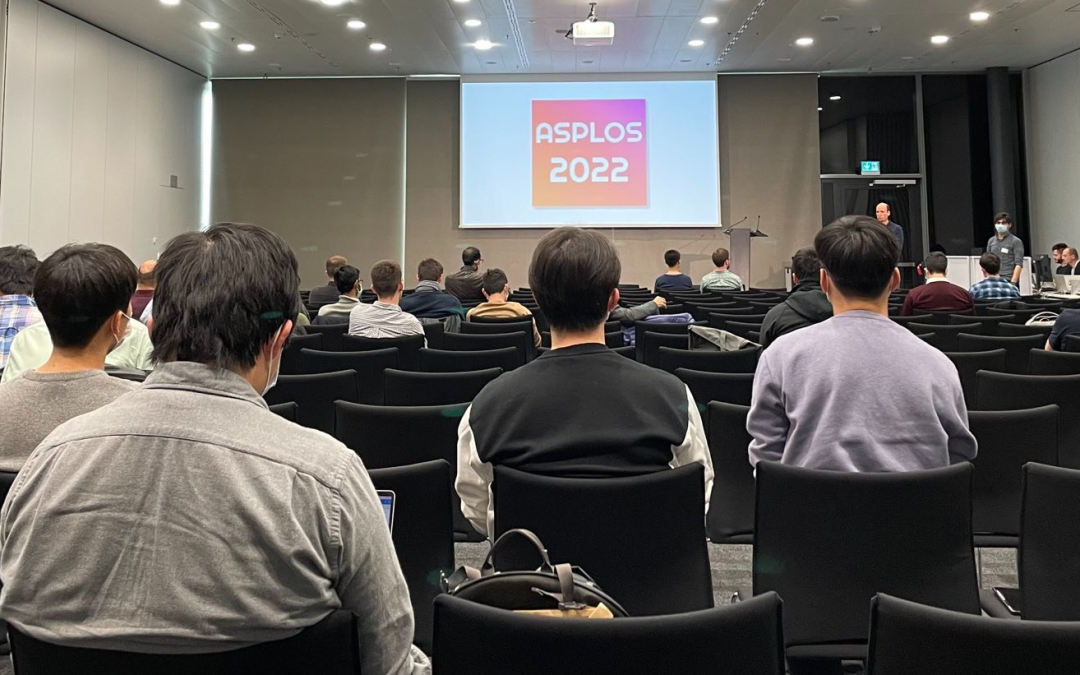 Early this March, computer and systems architects from the world over gathered in Lausanne, Switzerland to attend the 27th International Conference on Architectural Support for Programming Languages and Operating Systems, or ASPLOS 2022. The first conference to go virtual since March 2020, ASPLOS 2022 heralds the long-awaited return to in-person conferencing!

Enthusiasm among attendees was palpable, as many exchanged long greetings and reveled in physical interactions with colleagues. The snow-capped Alpine mountains and the neighboring Lac Léman served as idyllic background for the week-long conference and made for exceptional excursions during attendees’ free time. We thank the general co-chairs, Babak Falsafi (EPFL) and Mike Ferdman (Stony Brook University), and the entire organizing committee for orchestrating a perfect in-person reboot.

ASPLOS 2022 hosted a first-rate array of five workshops and nine tutorials, distributed across two days in both virtual and in-person formats. RSS2, CHERI, NOPE, and ASTRA-sim took place as virtual events, enabling the broader participation of attendees from across the globe, as was common throughout the COVID-19 pandemic. NOPE continued its mission of hosting a space for honest self-reflection on research projects, especially when results are not ideal or conventionally publishable. Meanwhile, the CHERI workshop guided interested software engineers through its hardware-software codesign efforts.

Symbolically flipping the page on the past two years, the remaining three workshops and seven tutorials welcomed attendees in person (and many with a hybrid component) for the first time since the beginning of the pandemic. Young architects attended great keynotes and panel discussions before flocking to the atrium to present their work at a lively poster session showcasing 20 fascinating, early-stage research projects. Participants in the Workshop on Languages, Tools, and Techniques for Accelerator Design sipped their LATTEs as they watched and discussed 10 papers with enthusiastic participation from everyone. The 5th SysTEX workshop brought together many great minds into a single (physical) conference room, as they discussed the finer points of trusted execution environments with two keynotes and 10 papers in the full-day workshop.

A diverse set of tools and their respective tutorials were also presented at ASPLOS, touching on topics such as computing in memory, serverless computing, simulation and design exploration for learning techniques, and ecosystems for hardware design generation/testing.

The three conference keynotes at ASPLOS 2022 covered varied topics in systems. On conference opening day, Professor Michael Franz (UC Irvine) presented his award speech for receiving the 2020 ACM Thacker Breakthrough in Computing Award. Professor Franz was recognized for his development of just-in-time compilation techniques which directly enabled the rich web services found on today’s Internet. On the second conference day, Professor Phillip Stanley-Marbell (University of Cambridge) gave a keynote highlighting insights in his work on autonomous systems. In particular, he described how the inherent noise and uncertainty in systems’ sensor data must be accounted for at the architectural level if we are to make gains in the trust of such systems. Finally, the third and final day’s keynote by Tim Harris (Microsoft) focused on distributed algorithms for large-scale learning platforms.

For ASPLOS 2022, a total of 80 papers were selected for the main conference proceedings. The selected papers spanned 18 topic sessions across three days, noting that hardware security and “Bugs” required two sessions apiece. The organizing committee gracefully supported both in-person presentations by authors, as well as accommodating remote author broadcasts in the conference rooms. The busiest session was frequently the hallway “track”, where conversations, collaborations, and ideas were free-flowing throughout the duration of the conference.

That is, except during the WACI talks, where Professor Sara Achour (Stanford) captured everyone’s attention in the keynote as she described the future of computing … with sticks! Kevin Loughlin (Michigan) followed suit and wowed the audience, rhyming his way through the talk. Professor Michael Roitzcsh (Barkhausen Institut) practically laid out an entire research agenda fueled by the software-defined CPU. Heng Zhuo (Wisconsin) didn’t want to give up his server threads, while Thaleia Dimitra Doudali (IMDEA) described vision processing on graphs coming out of memory traces.

The good vibes carried over into the poster session, which was co-located with a cheese tasting event. Faculty and students alike were presented with an exam, testing their appreciation of local Swiss cheeses as they interacted with authors at their posters. Three awards for the most “cultured” were (randomly) selected for a box of local Swiss chocolates, presented at the Gala Dinner.

To celebrate the last full day of the conference, attendees took the light rail to central Lausanne and walked down to the water’s edge, where the Olympic Museum (Lausanne has been home to the International Olympic Committee since 1915) welcomed them to a private museum tour and subsequent dinner. Awards for 4 best papers and 3 distinguished artifacts were formally presented at the Museum, as well as 3 influential papers from ASPLOS ‘92, ‘08, and ‘11.

ASPLOS 2023 was officially announced and moved to a three submission deadline format. The Spring deadline of March 31, 2022 recently transpired, while deadlines of July 7th for the Summer and October 13 for the Fall, respectively, are upcoming. Looking forward to seeing everyone at ASPLOS 2023!

About the authors: Elba Garza is final-year PhD Candidate at Texas A&M University under Daniel A. Jiménez. She will be joining the University of Washington as an Assistant Teaching Professor in Fall 2022.

Abdulrahman Mahmoud is a postdoctoral fellow at Harvard University, working with David Brooks and Gu-Yeon Wei. He is a steering committee member at CASA and CALM, and was the social co-chair with Elba Garza at ASPLOS 2022.