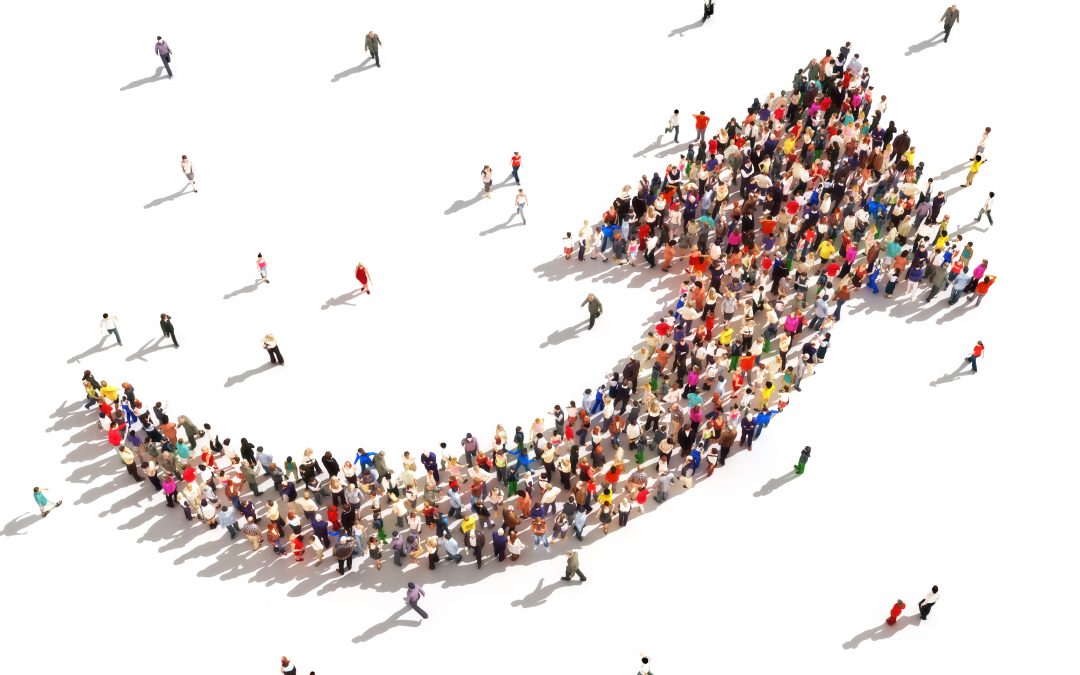 Inclusiveness is not limited to gender and race. Diversity of institution, nationality, and academic lineage are also key factors in encouraging a meritocracy in scientific exploration. This blog post presents a few measurements on these broader measures of diversity in computer architecture conference organizations. On both governance and diversity metrics, MICRO is an outlier compared to ISCA and ASPLOS. To improve diversity, it is necessary, but not sufficient, for MICRO to fix its governance. SIGMICRO and TCuARCH should excercise oversite, instituting Steering Commitee (SC) term limits, elected representation, and Program Chair (PC) selection policies. All are common best practices for ACM conferences. I urge you to express your opinions on inclusion and conference governance in the comments section of the MICRO diversity survey, closing February 28, 2018.

Recent events – the posting of a new MICRO SC without any new SC appointment policy in place and the diversity survey created by MICRO SC chairs Onur Mutlu and Scott Mahlke – prompted me to write. They illustrate how out of touch many remain with what inclusiveness means and its connection to conference governance. The survey ignores how the lack of policies, such as term limits, create insider-bias and negatively impact inclusiveness in the MICRO research community.

Since apparently my MICRO credentials are important to diversity, I am an author of five MICRO papers, served on the MICRO PC and ERC, and attend MICRO. As an author in architecture and programming language conferences for 28 years, frequent program committee member, program chair (ASPLOS, PLDI, PACT, ISMM, CGO), and SC member (ASPLOS, OOPSLA, PLDI, PACT, ISMM, CGO), I believe that MICRO and all these venues do a rigorous job of executing the peer review process for selecting papers for publication, the most important role of conferences. For instance, papers receive 3 or more reviews mostly from experts; authors have a response period before final decisions; in person PC meetings make final decisions accountable to peers; and the reviewers are double-blind, reducing bias.

Unfortunately, most aspects of diversity in “visible face” positions (i.e., program chairs, general chairs, key note speakers, SC, and panelists) at MICRO are also outliers. Some of these issues were pointed out in the Gender Diversity in Computer Architecture SIGARCH Blog and in Margaret Martonosi’s Statement on Diversity at the “Legends of Micro” panel. The table below adds to this evidence, showing diversity with respect to a wider range of criteria for the Steering Committee (SC) and Program Chairs (PC) of MICRO, ISCA, and ASPLOS, where community overlap is very high.

I sample three SC ten years apart because we expect turnover after ten years, but not consecutive years, since appointments are often 2 to 3 years. (In some other years, MICRO SC had one woman appointment.) I select PC because this position is the most prestigious and visible. PC is considered equivalent to a research award at many institutions.

The conference SC samples are from 2017, 2007, and 1997 for MICRO and ISCA; and 2017, 2008, and 2002 for ASPLOS. (ASPLOS SC prior to 2002 are not in the proceedings.) The program chair (PC) statics cover ten years, 2008-2017. Each year is an instance of the SC and PC. Appointments sum all people in each instance. The categories – Women, Under Represented Minorities (URM) relative to the U.S., Asian, and international (not at a U.S. institution) – count characteristics of each person once, regardless of the number of instances in which they appear. Same person counts individuals who served in two or more instances (not all instances of repetition). Overlap in institution counts institutions for distinct individuals and intersects them over all instances. Lineage means the same advisor, advisor/student, and advisor/grand-student. The source data is here. 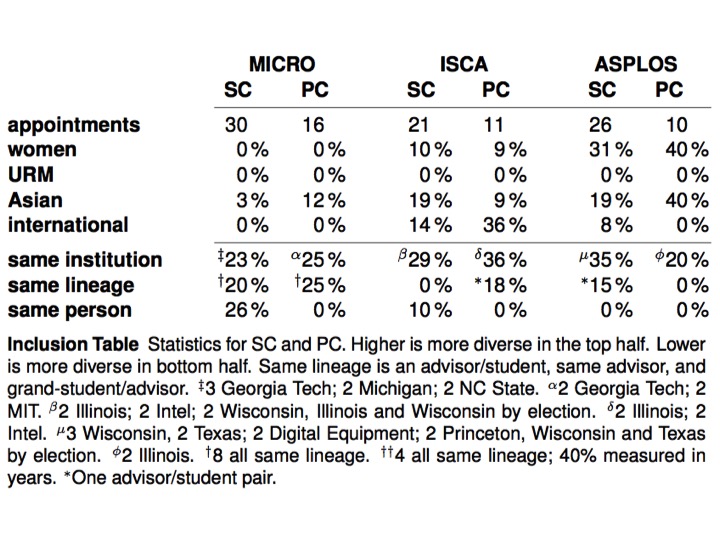 The table shows that MICRO actually had more opportunities to be diverse because it had more SC and PC members, putting zero women, URM, and international appointments in these years in an even worse light. ISCA and ASPLOS all have more women and international representation. For MICRO, all PC “awards” all went to men, 25% were at the same U.S. institutions, and 25% had the same academic lineage. If measured in PC years, shared lineage rises to 40% for MICRO.

Most disappointing is that no conference appointed an under represented minority (URM) to its SC or PC. ISCA and ASPLOS do better than MICRO in most metrics, but all have areas for improvement. All the conferences have high institutional overlap. Digging deeper shows that ISCA and ASPLOS SC overlap is due to elected members, whereas MICRO has no elected members. With two Intel and two Illinois, the ISCA PC has the highest institutional overlap. However, ISCA PC selection is a vote of all members of the SIGARCH and TCCA Executive Committees, all of which are elected.  Neither the MICRO PC nor the ASPLOS PC had international representation. With respect to lineage, there is an advisor/student pair for each of the ISCA PC and ASPLOS SC. For MICRO, the higher proportion of shared lineage is all the same lineage. All should monitor and improve inclusion, but MICRO has the most “potential for growth.”

The MICRO Test of time award is another example how lack of policies influence the community. No women authors have won, nor have any served on the committee. The 2017 committee has two members who have not published in MICRO in at least a decade. 5 of 13 awards have gone to co-authors with the same academic lineage and an author on 4 selections is the same person.

The lack of policies and term limits produces the perception, and by these statistics, actual insider-bias, which limits the voices and recognition of individuals that could have made MICRO a more inclusive (better) venue.

I urge ACM SIGMICRO and IEEE TCuARCH to take action. Install strong oversight, set up SC term limits and other policies on PC selection, Test-of-Time committee membership, etc., such that MICRO follows standard best practices. Help the community be more inclusive by monitoring and prioritizing diversity, by preventing the same people from serving on the PC repeatedly, and by producing and maintaining author and attendee lists to help populate all positions from a diverse set of community members. Beyond MICRO, tracking conference leadership statistics and the proportion of diverse members of the community can help all conferences be aware of bias and counter act its effects.

I urge you to take the MICRO diversity survey before February 28, 2018 and make your views on diversity and governance known. The end of the survey asks for other ideas. Please fill in this field with your ideas!

On a related note, the survey also missed asking about your experiences at conferences, e.g., Do you feel included? Why or why not? Are the conversations professional? Have you have been verbally or sexually harassed at MICRO or other conferences? Broader society is in the midst of holding individuals accountable for sexual harassment. I plan another, more personal, blog post to share how sexism, racism, and harassment are unfortunately a problem in our community. These problems reduce the meritocracy of our field. I urge you to address them in the comments part of the survey as well.

Most days, I love my career and research community.  What better job than working with motivated brilliant people to identify important problems, solve them, and write about them?  I am still thrilled when my papers are accepted.  However, academia is a competitive and patriarchal system. Your status in the community is a weird mix of your research, PhD institution, advisor, and current institution. Where your research is published determines if anyone actually reads it. Your paper and grant submissions are regularly rejected. You have a short amount of time to produce results that earn you tenure, or not.  As scientists, we can effect change to improve our community, making it fairer and more welcoming.  By limiting bias in all its aspects, the more inclusive our community will be, the more people will join, stay, and experience the joys of a research career.  All of us, our research, and society will benefit.

About the Author: Kathryn S McKinley is a Senior Researcher at Google. She is currently SIGPLAN Secretary. She is a member of SIGMICRO, SIGARCH, IEEE TCCA, IEEE TCuARCH, and SIGPLAN. She serves on the board of CRA and CRA-W. She is an ACM and IEEE Fellow.